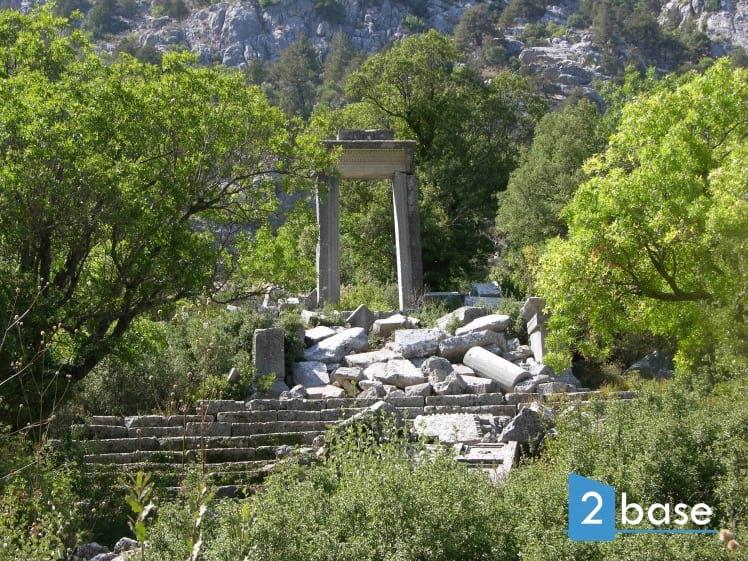 Hamaxia is within the borders of Pamphylia Region. It is believed that the town was founded before Roman period. It is known that a small poor community lived in Hamaxia between A.D. 100 and 200 under the reign of Coracesium (Alanya). Important parts of the ruins are dated from Roman and Byzantine Period.

Hamaxia is at a height of approximately 450metres so visitors on mountain bikes need to have strong calf muscles and be in good physical condition! The compensation for this is the fast downhill return journey to the Village ofElikesik. Often on the way to Hamaxia you will find goats grazing in the farmers fields belonging to the families living in the 10 Houses surrounding Hamaxia. It is said that ancient Hamaxia was a present from the Roman Ruler Anthony to Cleopatra in which she used the indigenous rich cedar trees for building new ships for her fleet. Although there is not much left of Hamaxia, you can still make out the layout and the northern city wall, which was solidly built and is still in quite good condition. The buildings in the centre of the city are in ruins and overgrown by bushes and shrubs. On the southern side what is known to have been a market place and surrounding buildings are a little more impressive.

Even If a visitor should be disappointed with the few ruins of the city, the unique view over Alanya and its castle in the east, the hotels and the beaches of Konakli and Avsallar in the west, and the Taurus Mountains in the north will more than make up for this.


Our monthly newsletter contains the latest news from the Turkish real estate market and includes the best investment opportunities.